Local hero to be honoured for saving pensioner from drowning

A Worthing businessman and longstanding customer of Inside Magazines is to be honoured after he saved the life of a pensioner who got into difficulty in the sea.

Henry Smith, 37, was enjoying the sunshine by the pier on Worthing seafront with his mum, wife and two children when he spotted Lesley Clark, 84, struggling in the water on Friday (17 June). 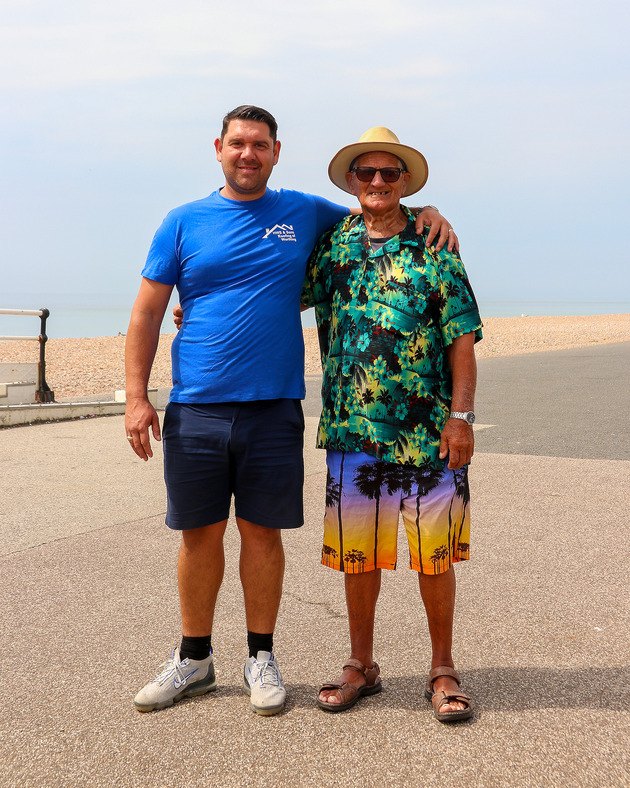 He raced into the water and dragged Lesley out before a team member from Worthing Borough Council’s coastal team administered first aid on the foreshore.
Lesley regained consciousness but due to the risk of secondary drowning he was taken to Worthing Hospital by ambulance. He was released on Tuesday (June 21).
And now Henry, managing director of Worthing-based roofing firm HWS & Sons Roofing, is to receive a letter of commendation from Cllr Dr Beccy Cooper, Leader of Worthing Borough Council, who will also recommend him for a Royal Humane Society honour, for individuals who put their own life at risk to save others.
Henry said: “It is great the Council wants to thank me, but the main thing is that Lesley is safe.  I was sitting on the beach enjoying the sun for half an hour and ended up saving someone’s life. As someone who owns a local company it is just nice to be able to give something back to the community.
“At first we thought Lesley was just enjoying himself but then it became apparent that he was really in distress, so I ran in and got him out. I wouldn’t say swimming was my strong point and he was drifting in and out of consciousness. I was just trying to hold him up but he was like a dead weight. But thankfully I got him out and then someone from the Coastal Office gave him first aid.”
Lesley had decided to go for his first swim in around 30 years but got into difficulty when he walked out over the hidden coastal shelf at high tide and was unable to regain his footing.
Lisa Liston, Lesley’s daughter, said: “Dad told me he was just going to put his feet in but he lied and went in. He still thinks he can swim like he did 35 years ago. He needs to realise he is 84 years old.
“One of my colleagues was eating her lunch on the beach and came back and said someone had been pulled out of the water. She described him and I dashed down but he had already been taken to hospital. It was horrible, but thanks to Henry he is out of the woods. But Dad is now grounded!”
Coastal team member Jeff House was first on the scene with a medical kit and defibrillator. Lesley was coughing up water so Jeff checked his condition and put him in the tripod position - a physical stance for people with respiratory problems - before calling 999.
Jeff admitted: “Henry saved his life. If he hadn't got him out, Lesley would have drowned. People don’t float when they are drowning. His head was underwater so he was in the process of drowning. It could have been a very different result had he not got help.”
And Henry’s efforts will now be officially recognised. Cllr Cooper said: “Henry saved Lesley’s life with his quick thinking and acting without fear for his own safety. We as a Council would love to honour his bravery with an official award.”
All Coastal Office staff have completed the Royal Yachting Association (RYA) First Aid training and First Aid at sea training as a minimum requirement.
Share this article...