PLAN FOR MUSIC, SKATING, TENNIS AND MARKETS TO BRING TEVILLE GATE TO LIFE

An 800-capacity music venue, indoor skate park and padel tennis courts could be among the attractions at a revamped Teville Gate, a report reveals.

Courtyard small units for young local creative independent businesses and pop-up markets are also in the plan drawn up by the company that created the Level 1 leisure space at Grafton Multi-Storey car park.

A report to Adur & Worthing Councils’ Joint Strategic Committee (JSC) says the company, QED Sustainable Urban Developments Ltd, is the preferred bidder to develop the site after a tender process was conducted.

The revamp would be what is known as ‘meanwhile use’ for the next three years as the Council seeks to bring forward longer-term proposals to build much-needed new homes and retail on the site.

On that front the report proposes a partnership with blue-chip development body London and Continental Railways Ltd (LCR) to bring to fruition the homes and retail plan.

LCR is already working with Worthing Borough Council on developing the Union Place site and has invested more than £1m supporting the regeneration of the town since 2018. The company is wholly owned by the Department of Transport and has been involved in hugely successful regeneration schemes at Kings Cross and Stratford in London and Mayfield in Manchester.

LCR will take a £1m stake in the site, bought by Worthing Borough Council for £7m this year in a bid to bring fresh impetus into regeneration efforts. This will secure it 14 per cent of the land and it will commit to matching the council with staff employed to secure development.

Leader of Worthing Borough Council, Cllr Kevin Jenkins, said, ‘This is really good news regarding Teville Gate. We have brought in two incredibly successful partners in their fields to bring fresh impetus into our plans.

‘Anyone who has been to Level 1 at Grafton will know what QED are capable of and the Teville plans go further than that with an exciting mix of trade and leisure proposed. It really will being this area back to life

‘We already have a successful partnership with LCR over Union Place and the company’s track record speaks for itself. I’m more confident than ever that we will begin to see some long awaited progress at Teville Gate.’

The report says that if the committee gives the go-ahead and planning permission is awarded the first of the ‘meanwhile uses’ could be open on the site in late Spring next year. QED is also planning a community garden for the site.

In its pitch the company says the development would ‘restore a key route through to the town centre and bring additional facilities for businesses as well as unique leisure activities for the whole community to enjoy.’ 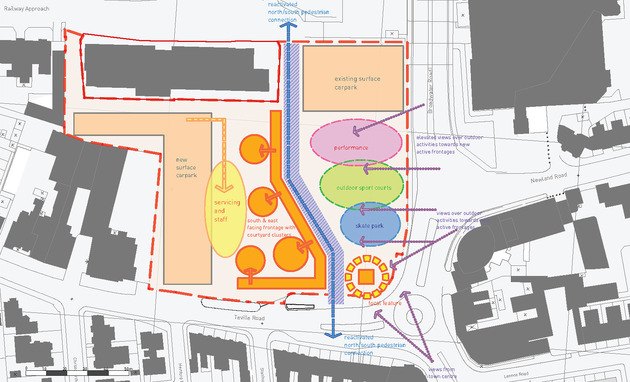 It says the borough has a gap in the market for a 600 to 800 capacity indoor music venue. It also says it plans two indoor padel tennis courts. Padel tennis, a mix of tennis and squash, is one of the fastest growing sports in Europe, it says. An indoor staffed skatepark  would cater for skaters and BMX riders it says.
Before that happens new attractively-designed hoardings, bearing the Time For Worthing brand, are to be erected and the north/south walkway from the railway station through to the town, closed when the Council demolished the old multi-storey car park, will be redesigned with new lighting erected.
In the longer term, subject to approval, the Council and LCR will begin drawing up plans for the long term development of the site including maximising the number of affordable homes to be built there and preparing a marketing plan to attract funding and a new house builder to the site.
The Council and LCR have already unveiled plans for 170 homes, a hotel, and expanded cinema on the Union Place site.
Executive members of the Council will discuss the report’s recommendations to support both the QED plans and the LCR partnership at a meeting of the JSC on Tuesday (Dec 7).

PLAN FOR MUSIC, SKATING, TENNIS AND MARKETS TO BRING TEVILLE GATE TO LIFEDecember 3rd, 2021
Have You Seen...